Here in Wales there’s a phenomenon known as ‘Welcome to Wales’, ‘Croeso I Gymru’. This occurs especially when one crosses the Pont Hafren (Severn bridge) in a westerly direction. Whatever the weather elsewhere, at this liminal point in time and space the rain always splats across the windscreen. Seems to work also at Cardiff airport – returning at midnight after a brief quest for winter sunshine the icy rain didn’t so much precipitate as move horizontally through the air. At least it woke me up enough to do the drive home.

We joke about it, but after this trip I’ve decided I rather like our welcome home. I had been in the island of Lanzarote. The place is basically one giant volcano rising from one of the split lines in the spreading tectonic plates of the Atlantic Ocean. In some areas the rocks are still hot enough to cook one’s dinner. In wintertime Lanzarote is very arid. A good chunk of the island is a plain of black lava dating back to the last eruption of the 1730’s, so dry that in all those years just a few lichens have as yet made it their home. Away from the lava field every stream bed is dryer than bone, and you’re likely to be scoured by windblown dust and sand. There isn’t a single tree apart from the tourist resorts and close by to dwellings. Much of the land is brown, with a few scrabby dried-up bits of vegetation waiting for their chance to bloom again when rain does come. (To be fair, the northern part is a little bit greener!)

I was very impressed by the work of the folk cultivating the better bits of land. Immaculate little rectangles of finely-raked black ground-lava soil have little hollows for every plant to catch the occasional drop of rain. Lots of onions were coming up nicely. Whole hillsides are covered with vineyards, where each vine, with woody growth trimmed back almost to ground level, has its own hollow perhaps a metre in depth, with a little drystone wall of lava lumps to add to wind protection. There’s a great deal of the world desperate for water. But here in Cymru, though we do sometimes grumble as to the sogginess, the gift of water means that the land is green, and when the sun does shine, the trees provide a gentle shade.

Water is very much a theme for the imminent festival of Imbolc. In folklore Imbolc is sometimes called a ‘breaking of the ice’, but I suspect that idea is both from a more northern location (like Scotland) and from a time when winters were colder (such as the ‘little ice age’ which lasted until the mid 1800’s). Nowadays it seems that floods are rather more likely. In the 30+ years that I’ve lived on this mountain, there has been a noticeable shift in climate. Used to be one didn’t think about gardening much before Spring Equinox, but Imbolc is now the time to begin planting if one is to make the most of the season. A greenhouse is essential of course for starting the plants in comfort.

In a song by Pagan band Aeolian Songspell, Imbolc is “The Season of Rebirth, Feel the Infant Stirring in the Waters of the Earth.” A lovely gentle song for the festival, also invoking ‘Galantha, the Snowdrop Queen’  – you can listen to it here:

Years ago I was introduced to the idea of Imbolc as a time for ‘Washing the Face of the Earth’. This is very much in accordance with ancient Roman practice. For them, February was the last month of the year (which started March 1st) – a time for purification, getting rid of the year’s detritus. In ancient Athens, their ‘spring-cleaning’ festivals of Kallynteria and Plynteria were held a bit later in the year. In Anglo-Saxon times February was ‘Solmonath’ (Mud month!) and also Kale-monath (cabbage – there wasn’t much else left to eat – though in Wales we have leeks also!) Here at Pandora the festival of Imbolc seems the perfect opportunity for a soapy slosh-around of the various statues that live outside in the garden, as well as an extra dusting of the altars.

For many of the Pagan community, whether or not they have other ‘Celtic’ or ‘Gaelic’ interests, the festival of Imbolc is focused on the Goddess Brighid. Her name seems to mean ‘Bright One’ and ‘Fiery Arrow’. Brighid was identified with Sulis Minerva of Bath, which makes her ‘Eye of the Sun’, as is the Egyptian Sekhmet. Brighid is usually thought of as a Triple Goddess, but this has no connection to the notion of maiden-mother-crone – sometimes there are three Brighids, sisters perhaps, but of the same ‘age’. Alternatively, you may easily associate Her with all the four elements of Earth, Air, Water and Fire – in short, She’s Goddess of just about everything. If you want to know more about her, and search the internet, you may well feel somewhat daunted – 927,000 results for ‘brighid goddess’! Brighid has become the focus for a true devotion, something felt in a deeply inter-personal way – She doesn’t fit into anyone’s allegorical boxes. In the 1960’s Vatican II ‘modernization’ it was declared that there was insufficient proof of the existence of any ‘Saint Brighid’ and she was thus ‘decanonised’. So She has been returned to us, and Her flame burns again at Kildare.

If you’re interested in knowing more of Brighid in the devotional sense you should look at Clann Bhride (Children of Brighid), a religious order devoted to this goddess – their website is at https://clannbhride.wordpress.com/   They publish a ‘Book of Hours’, on paper and also as free pdf. Some of the same folk have contributed to ‘The Cauldron Cill: Brighid Devotional’, available from www.lulu.com. This prayer is from the Clann Bhride introduction: ‘Who is Brighid’

Light me as Your lantern. 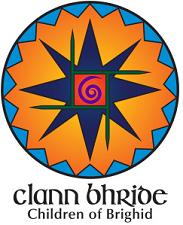 Play me as Your harp.
Keep me in Your mantle.
Guide me to Your hearth

Taking things beyond just three ‘aspects’ the Brigid-Along developed by Sassafras Grove of AD is a Novena, or potentially nine-day event. Starting at https://sassafrasgrove.org/tag/brighid-along/ (or search from brighid-along) – the nine rites celebrate Brighid as Midwife, Foster Mother, Initiatrix, Smith, Poet, Warrior, Guardian of Sacred Wells, Keeper of Hearth Fires, and as Healer.

For me, Brighid is Lady of the Mantle. Her mantle covers and protects the land and each person who asks for her protection. The threads of the mantle connect all things in the Web of Life. You may be interested in this 2010 article ‘Brigid of the Mantle: Brigid nam Bratta’ by Linda Iles, at https://mirrorofisis.freeyellow.com/id408.html. The visionary “Fiona Macleod” has Brigid saying:

“And I have been a breath in your heart.

“And the day has its feet to it that will see me coming
into the hearts of men and women like a flame upon dry grass,
like a flame of wind in a great wood…”

Our local Circle Dance group will be meeting towards the end of the ‘Imbolc season’. Dances will include the Romanian ‘Cradle Dance’ Joc de Leagane (traditionally in honour of the village midwife), the Bulgarian ‘Razvivaj Dobro’ (traditionally led by a nursing mother) and Zensko Oro (to the tune of ‘Come Bride, Enter In’. Shifting themes, the Corries’ “Peat Fire” seems just right for the Breton An Dro. My personal favourite music for Brighid is the song ‘Brighid Upon the Highland’, for which a circle waltz seems right. The tune is the traditional ‘Brigit O’Malley’, with words by Helen Farias and Craig Olsen. You can read a little more about the song here: https://www.gaiansoul.com/2012/01/30/a-song-of-devotion-to-brigid-on-the-highland/ and you can hear the song, even download it for free at: https://craigolsonband.bandcamp.com/track/brigid-upon-the-highland

To close, the simplest of all prayers for Her is in Gaelic, translating as “Walk with us, Brighid”, pronounced “Shoe lean ah Breejah”:

One Reply to “Imbolc and the Waters of Welcome”