This year, 2017ce, Winter Solstice happens at 16:28 (UTC) on Thursday, 21st December. This is a single moment, astronomically-determined, applicable world-wide. In the UK, this point will happen about an hour after sunset – it will already be dark. So to celebrate the renewal of the Sun, the dawn of December 22nd is the time. This scenario happens for us three years out of four – in leap years, the point of solstice times at around 10:00, an hour or so after sunrise on December 21st. Folk in other lands have to relate to their specific timings.

If ‘belief’ is not the primary concern for Pagans celebrating Winter Solstice, just what is it we actually do in order to experience the Mystery? Many of us are a bit unsure, I suspect. It’s difficult not to feel swept by the Xmas juggernaut. We can cope with dressing the house with holly and ivy, and are often willing to be kissed under the mistletoe.

Most important surely, is actually to celebrate Winter Solstice as our festival at this time of year, at its proper date, and as far as possible ignore the goings-on elsewhere. It’s good to meet up with others of the Pagan community but often these events are not at the date of the actual solstice. Pagan events vary from those intended as deeply psychologically transformative, to those involving wild drumming at midnight bonfires but both ends of this spectrum are often more suitable for adults than for children To involve kids, you need more home-centred activity. The traditions of present-giving and feasting are excellent – you just have to do them all three days before the rest of the world. (If you can get away with it, no nonPagan family to entertain, go for beans on toast as your actual Xmas day diet, or even fast!) The most difficult part of this timing is to hit the day after Solstice, realising that we’ve done it all while the rest of the world is still ‘getting ready for Xmas’. You may feel the need to hide out for a bit – enjoy some quiet.

Those in 24/7 public service employment may well be able to switch shifts so as to work instead on Xmas day itself. This is always appreciated by workmates. If you have no option but to work over Solstice day, the simplest personal devotional action makes the difference. We don’t usually imagine that it is our individual ‘magic’ that brings the sun to rise – Earth will keep turning on its axis, and will continue its orbit around the sun whatever we do as individuals – it’s our own heart and spirit that is transformed by the devotional rite. I like to simply light a candle, in a wind-proof lantern, to burn through the night in my outdoor Circle space.

(from Beautiful Darkness – I put this on loop!)

Within the Pagan community, there is often little chance to meet with others except for an evening dedicated to one of the standardised eight major festivals. But our spirituality doesn’t have to be restricted to eight evenings a year. For Solstice itself, most of us prefer to celebrate the renewal of the Sun rather than the moment of longest night. Nonetheless, going into the Darkness, welcoming Winter Cold, feeling the withdrawal of Life back under the Earth – all these things are important in the Year’s spiritual cycle, so are worth focusing upon in the days / weeks prior to the date of Solstice.

Finding a published rite suitable to this time isn’t always easy. I find the Pagan Book of Hours (online as well as printed) very helpful – though not necessarily child-appropriate. For example, their rites for December include invocations to both the Frost King (Dec 4) and the Snow Queen (Dec 11).. Their ‘Calendar of the Moon’ rites for the Elder month include two multi-day sequences – five days focused on the ‘Underworld’ and a four for ‘Dark Magic’.

Anger comes for us like a beast,
And prowls through our depths,
May anger turn to solace now,
By the work of our own hands. 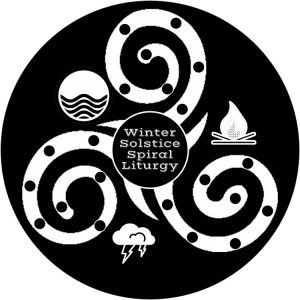 A different approach to daily-devotional practice is to use a sequence of rites leading up to Solstice itself. Only just being published is this Winter Solstice Spiral Liturgy by Jan Avende of ADF. The spiral starts here: https://hellenicdruid.com/2017/11/29/winter-solstice-spiral-liturgy-overview/

We adults may feel psychologically and spiritually battered by propaganda, commercial pressure and general falseness at this time of year. We feel stressed by it but it’s worse for our young ones, overwhelmed by Santa and his freebie-bringing Elves. They actually need extra support at this time as a counter to all that. Indeed it seems to me that the biggest single Xmas issue for children is ‘The Santa Question’. Outside primary school it’s quite unusual to see ‘Nativity’ tableaux, but Santa is everywhere, and readily encountered in corporeal form, nowadays complete with DBS certificate. Santa gives out gifts, apparently for nothing – even the requirement to have been ‘good’ is waived. Belief in the Nativity Story is optional, but belief in Santa is seriously encouraged by most parents. Strange that we are so reluctant to admit to giving our children presents in midwinter blessing! But then, a few years later, the truth is revealed and children are mocked if they are slow to give up on him. Just think what it means to children that their first experiences of the mystical / numinous / spiritual world are revealed as lies. No wonder our society is so bereft of inner meaning!

In modern media, Santa takes his appearance as much as anything from Coca-Cola’ advertising department. In earlier days he often wore green. Still, it’s clear that he comes from an older religious tradition. Many have linked him to Odin, and the reindeer to the Wild Hunt. Still extant in northern Europe are the traditions of Mother Holle, Frau Berchta and others who are sometimes called Frau Gode (“Odin’s wife”), lead the Wild Hunt themselves, and are also gift-givers. These seem to link us to even old traditions, of the Reindeer Mother. It’s good to celebrate Odin, Holle, or deity of your choice . We can see that these beings, as well as their other attributes, are the ‘First Shaman’ of primordial times.

Something else to get you into the shamanic mood is the ‘Solstice’ radio play by Alison McCleay, first broadcast by BBC Radio 4 FM, 21 December 1985 – I listen to it most years to help ‘get me in the mood’.  The voices are Michael Elder , Diana Olsson and Paul Young. There are numerous copies, not always of good sound quality, now on the net. For example: https://www.youtube.com/watch?v=LrI1tio2P6k This can serve as a Solstice-eve meditation, or you can try my own, linked below.

When my children were young I wanted to do something in place of ‘Santa’.  I had read a great deal from Eliade and others, which seemed to lead to shamanism as the source of our faiths. And then the Solstice Shaman presented herself. She’s not a deity, but one of us, walking the ways between mortality and infinity. many years later, I am still happy to follow a perspective and tradition for Winter Solstice that She inspired. It feels to me that it is reasonably complete and coherent, both consistent and entirely plausible as a more ancient practice. It’s not a rigid framework, and can be expansible as required. What this does for me is that rather than lying to our children, we are instead presenting ourselves as capable of handling spiritual transformation.I think the underlying ideas are just as meaningful for adults as for children. If you like this tradition, you are most welcome to adopt it and spread it more widely. The basic outline of what she told me works like this: 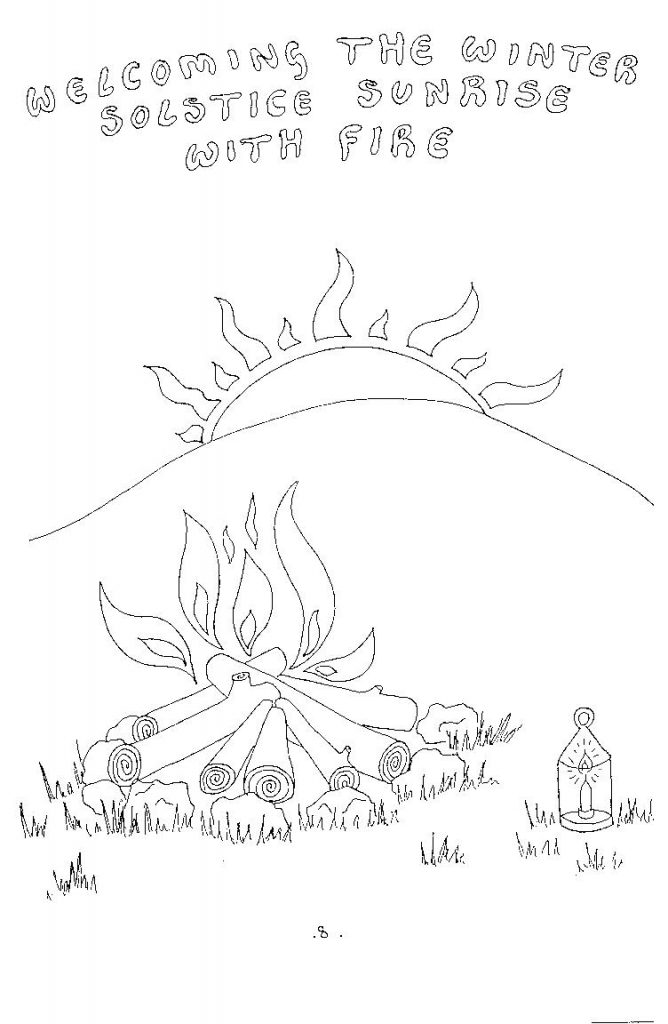